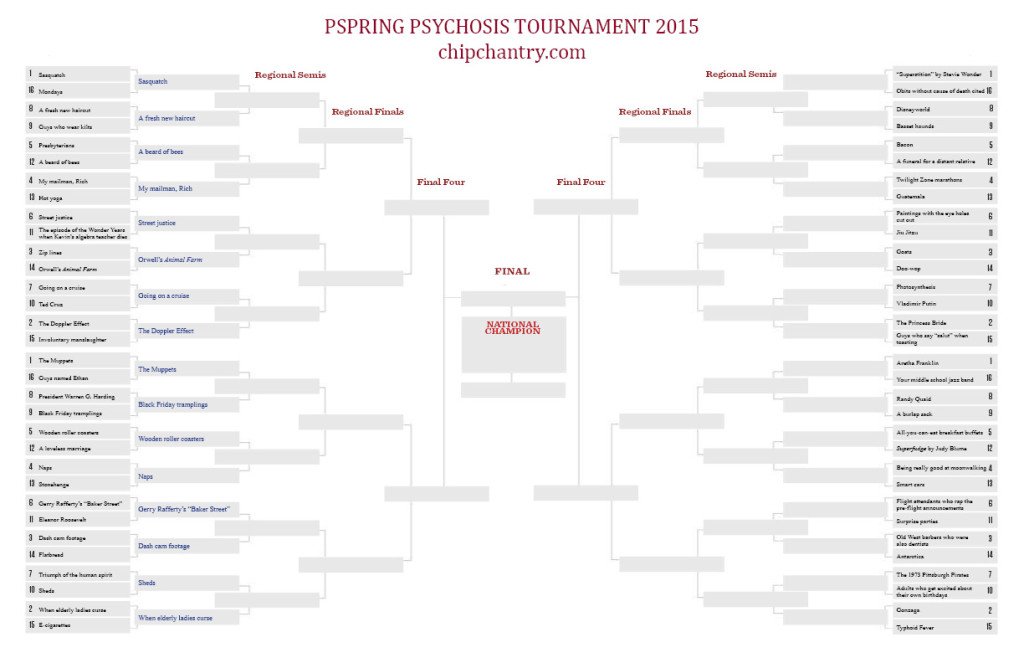 It’s official! Round one of the first annual PSPRING PSYCHOSIS TOURNAMENT is over!

Thanks to everyone who has been playing along at home, and especially to those of you who sent in or posted your predictions. Remember, unlike the NCAA tournament, it’s never to late to join in the fun. Sure, the first round is over- start anyway! And did some of your brackets get busted already? Start over! Or change your predictions! In fact, I encourage you all to cheat! WHAT DO I CARE?

Here are the first round winners of the LEFT SIDE of the brackets! You’ll find the winners listed, along with a complete breakdown of the match ups. The other half of the first round will be announced on Wednesday. Oh, and I hear that there are going to be some MAJOR UPSETS coming, and some of you people are gonna go apeshit. I can’t wait.

SASQUATCH vs MONDAYS
This was probably the most clear cut trouncing of the first round. Mondays didn’t stand a chance. If this was the late 80’s and ALF was still on TV, then maybe Mondays would have had some leverage. But let’s face it: No one ever has had “a case of the Sasquatches”. Sasquatch might not even be real. But Mondays are, and they are the WORST. No contest.
I’ll put it this way: Let’s say Sasquatch was real. And let’s say that a few of my family members went missing for a week during a hiking trip. Then it was found out that Sasquatch had mauled them all to death. Upon hearing this gruesome, horrific news, my first thought would be “It probably happened on Monday, right?”
WINNER: Sasquatch

A FRESH, NEW HAIRCUT vs GUYS WHO WEAR KILTS
“Oh, hey look! Kevin’s getting married, and he’s a quarter Scottish and/or Irish! So for the first time ever, he’s wearing a skirt to church for the most important day of his life! Man, he’s so a quarter Scottish and/or Irish!”
SORRY Dropkick Murphy’s fans. The smell of blue barbicide on a #4 cut around the ears beats you out from the neck up and the waist down.
WINNER: A Fresh New Haircut

PRESBYTERIANS vs A BEARD OF BEES
WHOA! IT’S THE FIRST 12-SEED UPSET OF THE TOURNAMENT!!!!
Don’t get me wrong: Presbyterians are pretty cool. They’re more chill than Catholics, they have good bake sales, and they’re even down with gay guys gettin’ hitched! But a BEARD OF BEES?? Come on, that’s the coolest. All those bees are crawling all over the dude’s face and neck, and he’s just like, “Nah, I’m cool. Make yourself useful and go fetch me some fritters”, like nothing’s even happening. If Presbyterians were just Lutherans, maybe they could have pulled this one off. Martin Luther, after all, was the original rebel.
WINNER: A Beard of Bees

MY MAILMAN, RICH vs HOT YOGA
“Excuse me; I’m interested in taking a Yoga class, but I have certain needs: I would like to be dehydrated, and I want to smell like 8 dudes with man buns named Derek. Also, which class guarantees that I will definitely get the sinus infection of the pregnant lady with the Misfits t-shirt next to me?”
NO CONTEST. Hot yoga is gross. My mailman, Rich, was in ‘Nam, and he brings treats for my dog every day.
WINNER: My Mailman, Rich

STREET JUSTICE vs THE EPISODE OF THE WONDER YEARS WHEN KEVIN’S ALGEBRA TEACHER DIES
This episode of the Wonder Years was funny, sad, challenging, and yet heart-warming. It took an awful, unexpected turn, and ended with some redemption. It pretty much had it all. But what it didn’t have was a dude getting knocked around by some guys with pool cue sticks in a back alley because he slapped somebody’s sister.
WINNER: Street Justice

ZIPLINES vs ORWELL’S ANIMAL FARM
Zip lines are awesome; there’s no denying it. Just ask Batman. But Orwell’s 1945 satire is a masterpiece. It roundly mocks Stalin’s socialist and communist philosophy of the day. The Soviet leaders, being so deftly portrayed by common pigs, are exposed to the world through Orwell’s tumultuous depiction on an otherwise pastoral farm setting. Truly a masterpiece of the 20th century.
WINNER: Orwell’s Animal Farm

GOING ON A CRUISE vs TED CRUZ
Even if your cruise ship sinks, becomes rampant with the Norovirus, or just fills up with raw tourist sewage, you’re still going to be better off than with this hack. An unwavering douche who looks like Fonzie’s corpse, Cruz doesn’t believe in climate change, but thinks he can be president. He’s the type of dude who couldn’t get a date to the prom, so he convinces the principal that dancing is the devil’s work.
I’d buy a round trip ticket for the hull of the Lusitania before voting for this corporate stooge any day of the week.
WINNER: Going on a Cruise

THE MUPPETS vs GUYS NAMED ETHAN
Let’s not waste time on this. The Muppets rule, and guys named Ethan drive their moms’ old Volvos to Phish shows where they try to make friends by selling Molly that they scored from their dad’s new girlfriend, Beth. After every Ethan fails out of college, he’ll spend a few years working in finance, because his dad pulled some strings. Eventually, every Ethan will be arrested for doing weird sex stuff at a resort in Telluride.
WINNER: THE MUPPETS

PRESIDENT WARREN G. HARDING vs BLACK FRIDAY TRAMPLINGS
Warren G. Harding worked tirelessly to improve the lives of children, laborers and African Americans. Also, he was quite the ladies’ man. Let’s just say that good ol’ Warren and his Harding got into a lot of shenanigans in their day. In fact, he loved so much, that his ticker gave out halfway through his first term. As per his dying request, Harding’s ashes were scattered over a bunch of flappers at a dance marathon in Cincinnati in October of 1923.
If Harding could’ve lasted through his whole term, he would’ve had a chance. But even for a president, there is nothing more American than when people stampede over each other in order to get a flatscreen TV at Walmart on the morning after Thanksgiving,
WINNER: Black Friday Tramplings

NAPS vs STONEHENGE
“Oooooooh… a prehistoric monument in England that’s one of the world’s most recognized sites…” UGH. Put a cork in it, gov’na! If I was interested in British stones that were older than dirt, I’d buy one of Mick Jagger’s solo albums.
WINNER: NAPS

GERRY RAFFERTY’S BAKER STREET vs ELEANOR ROOSEVELT
Eleanor Roosevelt: GREAT LADY. But even when she was the longest-serving first lady in U.S. history, she never had a sax-solo like this.

DASH CAM FOOTAGE vs. FLATBREAD
No contest here. Dash cam footage is ALWAYS awesome. You never see anything boring on a dash cam. It’s all fist-fights, gun play, car chases, and the occasional drunk dude walking a straight line like a chimp during a DUI stop.
Flatbread is for people who love pizza, but HATE JOY. It was invented because some dude (I’m guessing a cousin in the Panera family) thought to himself, “What if I made a pizza out of cardboard, cream cheese and avocados? And you know what? I’m not even going to make it into a circle! It’s just going to be one big jigsaw puzzle of disappointment!”
WINNER: DASH CAM FOOTAGE

TRIUMPH OF THE HUMAN SPIRIT vs SHEDS
Man can scale the highest mountains. He can sail the widest of seas. No matter how much adversity a person may face, those obstacles are no match for the human spirit.
But at the same time, sheds totally rule. They can hold bikes, lawnmowers, lawn tools, and your ice hockey equipment that your parents spent $700 on and then you quit after the second game. Plus, a shed can also house a top-secret lair where you can put up hundreds of newspaper clippings that are linked by different color yarn, depending on the nature of the conspiracy that’s been perpetrated by the Illuminati, CIA, or extra-terrestrial alliances that are all listening in to your thoughts via your NetFlix account. But you’re on to them. They don’t know it, but when the zero hour is nigh, you will have your plans in order to not only evade these networks of evil, but to turn them against each other! YOU WILL BE THE ONE TO WATCH THE WORLD BURN!
Plus, sheds can hold Christmas ornaments!
WINNER: Sheds

WHEN ELDERLY LADIES CURSE vs E-CIGARETTES
Here’s a complete list of all the places you can look cool smoking an e-cigarrette:
1. The Cantina from Star Wars
WINNER: When Elderly Ladies Curse