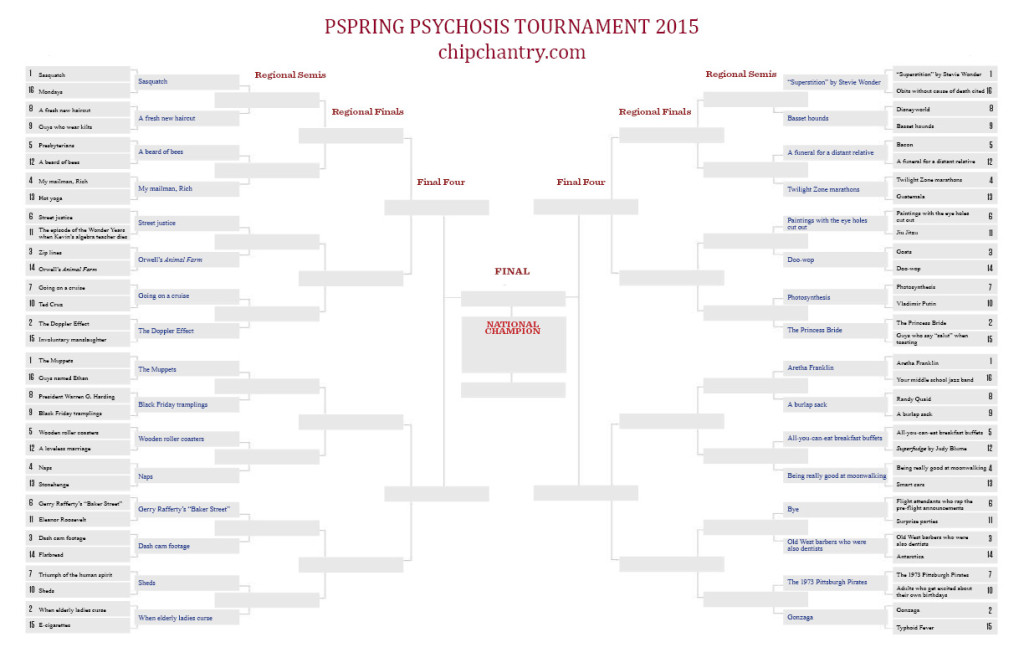 “SUPERSTITION” BY STEVIE WONDER vs OBITUARIES WITHOUT THE CAUSE OF DEATH CITED
What, am I a detective? Now I have to scour this guy’s Facebook page and twitter account for clues about what happened. AND I DIDN’T EVEN LIKE HIM THAT MUCH IN THE FIRST PLACE. Oh, and nice job asking me to make a donation to the local library in his name. That tells me nothing. Every obituary should have symbols at the bottom that tell you how THAT show ended. “Oh, look Josh died suddenly.” “What happened?” “Well, there’s a picture of an empty pill bottle at the bottom of the obit… wink”.
Seriously, the opening beat to Superstition would’ve won this one on its own.
WINNER: “Superstition” by Stevie Wonder

DISNEY WORLD vs BASSETT HOUNDS
“I’M GOING TO DISNEY WORLD! BECAUSE I WANT TO FLUSH HALF A YEAR’S SALARY DOWN THE CRAPPER SO MY FAMILY AND I CAN GET IN A SCREAMING MATCH WITH EACH OTHER ABOUT GOD KNOWS WHAT WHILE STANDING IN LINE FOR FOUR HOURS BEHIND THE MOST OBESE PEOPLE IN FLORIDA TO SEE SOME ELECTRIC PUPPETS SING SONGS ABOUT HOW THE PHONOGRAPH WAS MADE! MAYBE THEN, I’LL GO TO FAKE NORWAY! OR, PERHAPS I’LL SPEND $15 ON AN ICE CREAM CONE, AND THEN TAKE THE MONORAIL BACK TO POLYNESIAN AND END IT ALL IN THE BATH TUB!”
If I wanted to go on vacation to a place designed by a diabolical anti-Semite, I’ll go to my great uncle’s hunting cabin in the Poconos.
WINNER: Bassett Hounds

BACON vs A FUNERAL FOR A DISTANT RELATIVE
A 12 SEED UPSET!!!! A 12 SEED UPSET!!!
Look, I’m gonna catch a lot of heat for this one, but I don’t care. Bacon’s not that great. Yeah, it’s FINE, but you people are embarrassing yourselves, falling all over each other every time you hear the word. Bacon is the Kim Kardashian of the food pyramid: All hype. I can’t wait for the bacon backlash. Then all of you people will look stupid with your greasy faces and hypertension medicine.
On the other hand,  funeral for a distant relative is a great Cinderella story. At first you think it’s sad, plus you have to get dressed up and drive to some small town upstate, and on a SATURDAY nonetheless. But upon further inspection, it’s not half bad- it’s not THAT sad, because you hardly knew the old guy. Plus, all your cousins are there, and you never get to see them. Plus, there’s an OPEN BAR at the wake. It’s like a wedding, but you didn’t even have to get Uncle Herb a present! Oh, and get this- guess what the shrimp hors d’oeuvres are wrapped in- BACON!
WINNER: A Funeral for a Distant Relative

TWILIGHT ZONE MARATHONS vs GUATEMALA
Look, you couldn’t even find Guatemala on a map. It’s not like it’s a cool country, like Ireland, or Vermont. And what’s cooler than 36 hours of aliens, boxing robots, and ventriloquist dummies that come to life? Oh, and you know who youwon’t find in Guatemala? A YOUNG BURGESS MEREDITH, THAT’S WHO.
WINNER: Twilight Zone Marathons

PAINTINGS WITH THE EYE HOLES CUT OUT vs JIU JITZU
HERE’S HOW Jiu Jitzu was probably invented: “You know, Brendan, I really enjoy martial arts. But you know what else I like? HUGS.” Don’t get me wrong- without Jiu Jitzu, we would never know who was the best at spooning. But paintings with the eye holes cut out? That’s badass. First of all, if you have paintings with the eye holes cut out, you’re probably rich. There’s never been just some dude who lives in a shitty apartment who’s cut eyes out of his Scarface poster so he can spy on his roommates playing Xbox. It’s always a rich guy in a smoking jacket who owns a big mansion, and throws fancy dinner parties where you discuss opera, and a lady gets murdered. It was the internet before the internet. “Master Pennington, will you be going on Facebook this evening?” “Why, heavens no, Saunders! I’ll be standing behind this portrait of my great-grandfather, Colonel Pennington, spying on the Lady Hathaway while she’s on the can.”
WINNER: Paintings with the Eye Holes Cut Out

GOATS vs DOO-WOP
REAL TALK: This was one of the closest match ups of the tournament so far. Despite Doo-Wop’s low seed, it proved to be too much for goats. Goats are great. They’re funny, they give milk, and they can eat tin cans. Plus, have you ever seen goats climb the side of a mountain? It’s majestic. But I don’t think any of you have ever seen four goats standing around a fire barrel on a street corner, harmonizing their way into all gals’ poodle skirts. Sorry, goats.
WINNER: DOO-WOP

THE PRINCESS BRIDE vs GUYS WHO SAY “SALUT” WHEN TOASTING
Hello, my name is Inigo Montoya. You sound like a douche when you make a toast like that. Prepare to die.
WINNER: The Princess Bride

RANDY QUAID vs A BURLAP SACK
Randy Quaid was Cousin Eddie. Plus he crushed it in Kingpin. And don’t forget Of Mice and Men! Plus, he’s literally insane now, and made a crazy sex video with Rupert Murdock. But on the other hand, burlap sacks are so versatile! You can do almost anything with them- you can carry a bushel of apples, make a scarecrow, have a sack race, or drown an unwanted litter of kittens!
This is literally a toss up. I’m going to toss a coin on this one. It’s too close to call. Here goes.
WINNER: A Burlap Sack

ALL-YOU-CAN-EAT BREAKFAST BUFFETS vs SUPERFUDGE by JUDY BLUME
In Superfudge, Judy Blume failed to maintain the complex themes of hopelessness, alienation, and nihilism as she did so deftly in the predecessor, Tales of a Fourth Grade Nothing. And let’s face it, when Fudge is 3 years, old, it’s funny when he’s mischievous. But now he’s a few years older, and he’s basically just being a dick at this point.
Do you want more French Toast sticks? I thought so.
WINNER: All-You-Can-Eat Breakfast Buffets

BEING REALLY GOOD AT MOONWALKING vs SMART CARS
Smart Cars may be good for the earth, but we’re talking about walking on the moon, here. This one is simple: Who looks cooler- someone driving down the block in a Smart Car, or someone moonwalking down the bike lane? OH! And which one is more fuel-efficient, you IDIOT?
WINNER: Being Really Good at Moonwalking

FLIGHT ATTENDANTS WHO RAP THE PRE-FLIGHT ANNOUNCEMENTS vs SURPRISE PARTIES
Both of these endeavors always end up with the same result: a bunch of adults sitting quietly, thinking to themselves, “I wish I was in another city right now.”
WINNER: Neither. THEY BOTH LOSE. And face it, do you really think either of these duds are going to beat Old West Barbers Who Were Also Dentists in the second round? NOPE. Let’s just end it now for both of them.

OLD WEST BARBERS WHO WERE ALSO DENTISTS vs ANTARCTICA
Close your eyes. Now, imagine allowing the lady who cuts your hair at Great Clips to put her hands in your mouth. Still beats the hell out of Antarctica, or as it’s more commonly known, “Earth’s frozen taint”. OK, open your eyes. And be sure to floss.
WINNER: OLD WEST BARBERS WHO WERE ALSO DENTISTS. (Sorry, penguins.)

THE 1973 PITTSBURGH PIRATES vs ADULTS WHO GET EXCITED ABOUT THEIR OWN BIRTHDAYS
Here’s a list of super-fun party tips for someone who is going to throw him or herself a birthday party:
1. Learn to hate yourself more, and cancel it. No one respects you.
On the other side, The Pirates picked up catcher Jerry McNertey in the spring. McNertey was at the tail-end of his career and was released in June.
WINNER: The 1973 Pittsburgh Pirates

GONZAGA vs TYPHOID FEVER
The Bulldogs are looking strong, with junior Kyle Wiltjer leading the team with 17.1 points per game. This could be Gonzaga’s year. Plus, Typhoid is a disease you get from eating poop. I think there’s a clear-cut winner here.
WINNER: Gonzaga