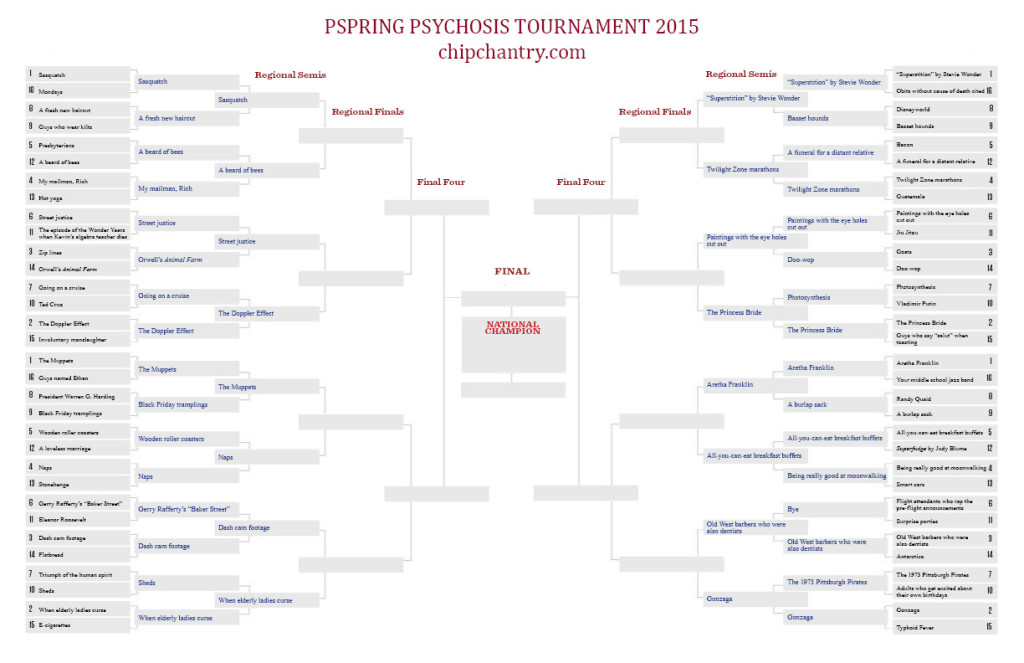 Read on to find out who makes it to the Svelte Sixteen!

SASQUATCH vs A FRESH NEW HAIRCUT

I’m going to ask you a very simple question: Have you ever seen the movie Harry and the Hendersons? Now, have you ever seen a movie about getting a really good haircut? I didn’t think so.
I’ll admit, I get a little spring in my step when I get a new ‘do, but not the kind of spring as when I think about the Skunk Ape.
WINNER: Sasquatch

A BEARD OF BEES vs MY MAILMAN, RICH
Look, Rich is a good guy. But here’s the thing. Postal work is lonely work. A mailman is basically a government-sponsored gypsy: always on the move; house to house, block to block. It’s a young man’s game. Rich is getting older; he’s getting lonely. Sure, it’s glamorous. But sometimes your mail carrier just wants someone to talk to. And in Rich’s case, that someone is me. And what he wants to talk about is usually fairly off-color. And loud. And for 20 minutes at a time. And in front of the neighbor kids.
The thing about a beard of bees is, the guy wearing it usually has the same thoughts as Rich. But he’s not saying a damn thing. He’s staying pretty motionless, trying to avoid the ER. Sorry to disgruntle you, Rich.
WINNER: A Beard of Bees

STREET JUSTICE vs ANIMAL FARM
Sorry, Street Justice. Animal Farm’s brilliance has beaten you. This book, even with it’s many accolades, is still under-appreciated for its raw genius. Written in an elegantly simple style, Orwell uses the turmoil faced on the farm by the animals as a metaphor for the Russian Revolution itself. It shows how a people’s fight for freedom can so quickly morph into a power play as chaos ensues. Orwell cleverly plants lies, illiteracy, and even a head hunt throughout the novel to explain the oppression, propaganda and elaborate excuses that led to the rise of the Soviet dictatorship. Yet, this novel goes beyond addressing the Russian Revolution; it speaks to all revolts there have been and will ever be. It suggests
OK, I’m sorry. I never actually read Animal Farm. I was supposed to read it in 7th grade, but I never got around to it. I got by in English class that quarter by reading Jason Jones’s Cliffs Notes in homeroom every morning. In fact, I stole this analysis from the Guardian website. I got nothing. As far as I know, it’s basically just Charlotte’s Web with more weaponry. I want to apologize to you people, to my parents, and to Mrs. Weinhold, my 7th grade English teacher. I didn’t deserve that B-.
WINNER: Street Justice

GOING ON A CRUISE vs THE DOPPLER EFFECT
Picture this: A beautiful island vacation. But now, imagine that this island can float! And sail! And possibly sink! Or break down! Or run rampant with gastrointestinal illness! Or get hijacked by pirates, or hit an iceberg, or get torpedoed, or get stuck in shallow waters while the Italian captain takes off in a lifeboat to shore! Or be Kid Rock-themed! Doesn’t sound like much fun, does it? Save your money. Go get drunk at the beach instead.
WINNER: The Doppler Effect

THE MUPPETS vs BLACK FRIDAY TRAMPLINGS
Black Friday tramplings are my favorite way to kick off the holiday season. It’s also my favorite aspect of capitalism. I always wonder what it must feel like to literally run over someone to buy something on sale.Think about this: If you actually trampled someone to death to buy a new TV, and you take it home and install it, do you think that deep down, it feels a little better? Like you earned it a little more? It’s gotta be like eating a fish that you caught yourself.
Still, the Muppets rule. Sorry, pre-holiday, mob-mentality manslaughter.
WINNER: The Muppets

WOODEN ROLLER COASTERS vs NAPS
Let’s say it’s 3pm on a Tuesday. Or, right after brunch with the gals. Or, in fact, just about any time: Someone comes up to you and asks you, “Right now, you can either ride a wooden roller coaster, or take a nap.” Unless you’re seven years old, you’re going for the nap, compadre.
WINNER: Naps

GERRY RAFFERTY’S “BAKER STREET” vs DASH CAM FOOTAGE
Despite having the most badass sax solo on the planet, “Baker Street” has never sent a lousy criminal to jail, or a got crooked cop fired. I mean, if it did, it would win in a heartbeat. Sorry, GR.
WINNER: Dash Cam Footage

SHEDS vs WHEN ELDERLY LADIES CURSE
In your adult life, has a shed ever made you giggle uncontrollably?
WINNER: When Elderly Ladies Curse

“SUPERSTITION” by STEVIE WONDER vs BASSET HOUNDS
Basset Hounds are great dogs. But they bark. A LOT. I don’t think any of you have ever been listening to Stevie Wonder’s “Superstition” and yelled, “QUIET, CLANCY! QUIET! SHUT UP CLANCY! CLANCY! SHUT UP! QUIET! QUIET! SHUT- You shut up now, or so help me God, I’ll get the newspap– DON’T YOU LOOK AT ME LIKE THAT! You’re gonna get it! SHUT- SHUT UP! I’LL DRAG YOU RIGHT TO THE POUND, CLANCY! SHUT UP!”
WINNER: Superstition

PHOTOSYNTHESIS vs THE PRINCESS BRIDE
I just googled photosynthesis. The funny thing is, despite converting the sun’s energy into food that we and all other beings depend on for nourishment, the one thing that photosynthesis does NOT possess is a cast including Andre the Giant, Billy Crystal, Carol Kane, Christopher Guest, Mandy Patinkin, Jenny from Forrest Gump, Fred Savage AND Columbo! You think that photosynthesis wins this round?Inconceivable!
WINNER: THE PRINCESS BRIDE

ARETHA FRANKLIN vs A BURLAP SACK

After some serious deliberation, I have come to the conclusion that among other things, Aretha Franklin was in The Blues Brothers, and burlap is kinda itchy.
WINNER: Aretha Franklin

ALL-YOU-CAN-EAT BREAKFAST BUFFETS vs BEING REALLY GOOD AT MOONWALKING
Michael Jackson was arguably the BEST at Moonwalking. And look what happened to HIM!
WINNER: All-You-Can-Eat Breakfast Buffets

OLD WEST BARBERS WHO WERE ALSO DENTISTS WINS IN A BYE
Good thing. Those barbers who were also dentists will need their rest before facing Gonzaga. Those guys are looking strong.

THE 1973 PITTSBURGH PIRATES vs GONZAGA
With Mark Few’s leadership, and Junior Przemek Karnowski’s physical presence in the paint, they handily defeated the 1973 Pirates, who ended up 80-82 on the season. Pitcher Steve Blass’s 9.85 ERA and Doc Ellis not dropping any acid helped to make it a fairly lackluster summer at Three Rivers Stadium.
WINNER: Gonzaga

CHECK BACK TOMORROW TO SEE WHO MAKES THE ELEGANT EIGHT!

With so many National Parks closed, things are getting grim. To attract visitors, Old Faithful in Yosemite started shooting Purell.

A lot of people are predicting there’s going to be a wave of Covid-19 babies. And they’re predicting that some popular names will be “Corona” “Quarantine” and “That Bitch Carole Baskin”.