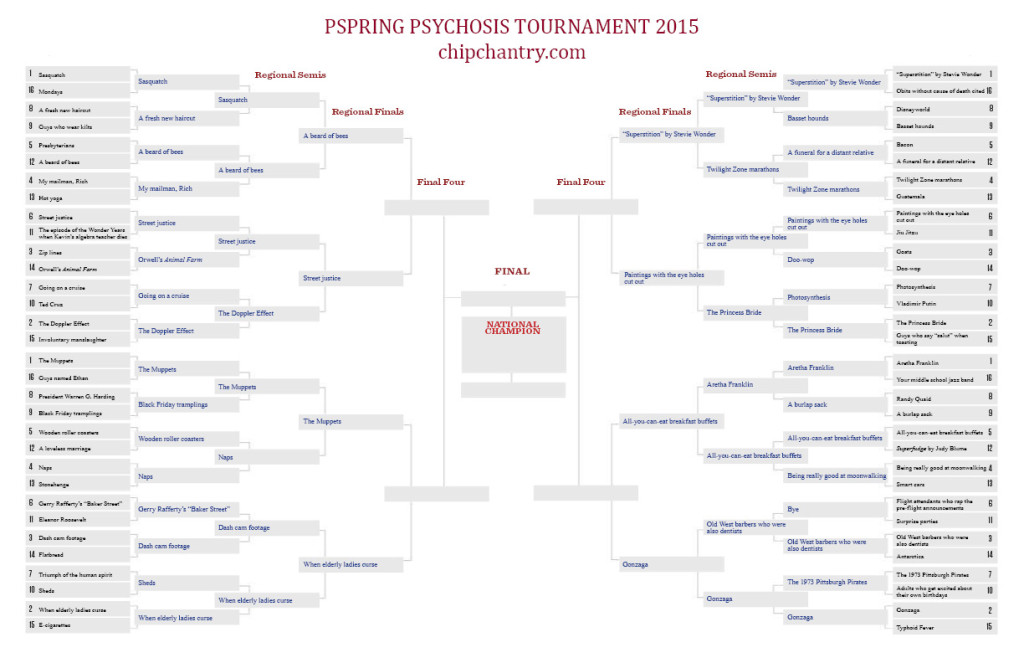 Sasquatch Gets Stung!
Naps Beat Out by a Sleeper!
YOU MAKE ME FEEL LIKE A NATURAL WOMAN!!!

Now, before any of you get up-in-arms about any of these picks, please remember that I consider all of them winners. These matches are getting really close, and I have much admiration and respect for all the contestants. But, as my father once said to my foster brothers Mikey and Nathan, “Hey, some of you gotta go home”.

SASQUATCH vs A BEARD OF BEES
Look, Sasquatch. Just like Santa Claus, a laugh-out-loud episode of The Big Bang Theory, and Ra, the Egyptian God of Sun and Radiance, I’m sure you exist, but I’ve never actually seen you. But a beard of bees on the other hand, is very real. Just ask my late Uncle Curtis. So, unless you show your beautiful face by midnight tonight, a beard of bees gets the W.
WINNER: A Beard of Bees

STREET JUSTICE vs THE DOPPLER EFFECT
Hey, call me when meteorologists start predicting storms by getting five buddies with baseball bats in the back of a pickup truck. “Hey, Kevin, did you hear we’re getting some snow tomorrow? Yeah, I found out because I was SLASHING Craig’s tires.” Never happens.
One final question: Did Carl Weathers star in a hit 1991-1993 television series called The Doppler Effect? Why no, as a matter of fact, he did not.
WINNER: Street Justice

THE MUPPETS vs NAPS
Naps are a refreshing, healthy part of any toddler’s day, or a horrifying, potentially lethal truck driver’s overnight solo haul across Ohio. Yet, the Muppets are an American institution. They’re funny, they sing; they taught most of us how to count. I mean who cares if Scooter doesn’t have eyes if he takes off his glasses? Who cares if Fozzy Bear doesn’t have the funniest jokes? Who cares that Gonzo has been on the Terror Watch List since 9/11? The Muppets rule.
WINNER: The Muppets

DASH CAM FOOTAGE vs WHEN ELDERLY LADIES CURSE
I’m pretty sure that if there was dash cam footage of an elderly lady cursing, the Library of Congress would keep it in its archives. But as far as I know, there is not. Dash cam footage is great. One drawback: Did you ever see something really intense happen on a dash cam video, and then you realize it’s just a bunch of Russian people, so the drama is lost, because who gives a crap about those jerks, right? Or, as my great-aunt Bernice would say, “You can tell those commie “f–ks to shove it up their Soviet d–ks!”
WINNER: When Elderly Ladies Curse

“SUPERSTITION” by STEVIE WONDER vs TWILIGHT ZONE MARATHONS
I love the Twilight Zone. And I’ll watch as marathon whenever it comes on. But take a look at this video of Stevie Wonder doing an insane 7-minute version of Superstition on Sesame Street of all places, and tell me that it deserves to lose. I mean, this performance might just bring the whole bracket down right now. Game over.
WINNER: Superstition

ARETHA FRANKLIN vs ALL-YOU-CAN-EAT BREAKFAST BUFFETS
A song, sung to the tune of “A Natural Woman”:

Looking out on the morning rain
I used to feel so uninspired.
And when I knew I had to face another day,
Lord it made me feel so tired

OLD WEST BARBERS WHO WERE ALSO DENTISTS vs GONZAGA
As cool as they were, I’ll bet anyone could have been a barber/dentist back then. You just needed a striped barber pole, some scissors, a gallon of whiskey and a pair of pliers. It’s not the finesse game that dentistry is today.
But speaking of finesse games, Bulldogs’ junior Kyle Wiltjer is having a tournament for the ages. This kid puts a touch on the ball that I haven’t seen since a young Christian Laettner graced the boards. These guys could go all the way.
WINNER: Gonzaga

BE SURE TO CHECK IN TOMORROW TO FIND OUT WHO MAKES THE FAB FOUR!